How did I get in contact with “long exposed galaxies”?

Most amateur astronomers do not have perfect conditions for doing their hobby. Most of us observe with light pollution, others do not have an expensive equipment to make very long exposures from galaxies. Nevertheless there are quite possibilities to be part of the topic “long exposed galaxies” within this project! This small abstract describes my personal idea how I got in contact with this project and the team. The frequently asked question from the group leader Peter Riepe whether pictures from the Digital Sky Survey (DSS) or other catalogues were meanwhile already analyzed contrast-enhanced was general answered with no feedback. Due to my light-polluted observation site and the absent possibility for long-term photography of galaxies this question became more and more attractive. The fact that tidal streams are quite provable in the photographs of the ESO online Digitized Sky Survey already before beginning of this idea showed an example of NGC 3521. 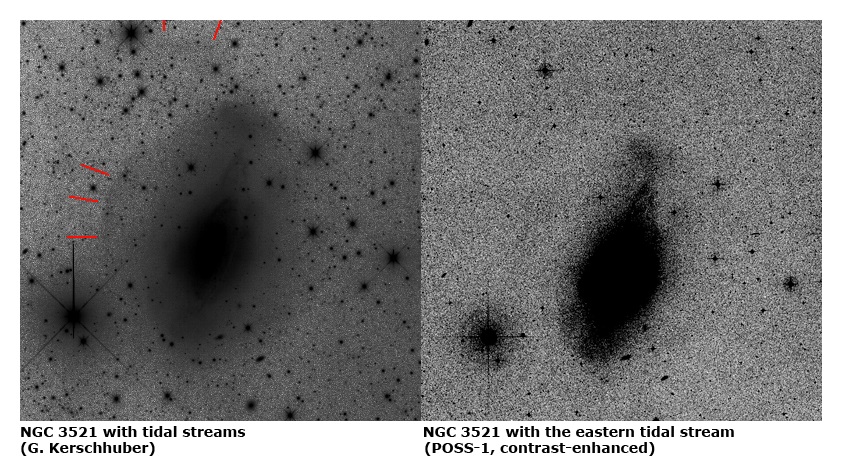 With the help from databases and their accessibility over the internet I wanted to support the interesting topic “long exposed galaxies” from a completely different point of observing: Searching for interesting details on the desk without own telescope from a light-polluted observing site! In this context the idea was developed to make my own subproject:

For the realisation of this idea it was only necessary to extract all galaxies of the NGC/IC catalog as image file from DSS. After that I had to submit all galaxy pictures an extreme contrast-enhancement process. In the final step I had to evaluate all produced pictures.   And then I did it what had to be done …

The used database of the NGC/IC catalog has altogether 8682 galactic objects, which extends over the complete declination range. Beside the positive downloaded images still three further variants were constructed for evaluation:

These four pictures per galaxy (in sum thus scarcely 35,000 pictures) were arranged then in a table structure next to each other and waited now for the evaluation. 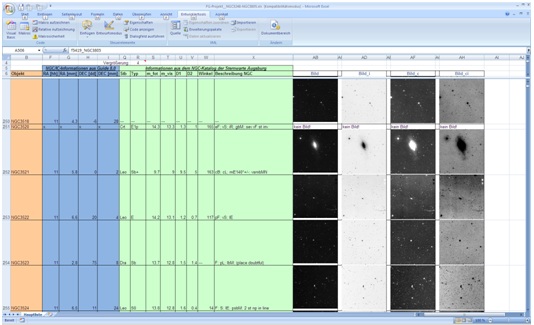 In the first passage these pictures were all examined with the naked eye. All distinctive features were marked, thus a first valuation-neutrally data selection had taken place. For the following astrophysical evaluation of the variety of marked pictures I needed however support. In this already pre-selected project stage I addressed myself to Peter Riepe, who – of the range of galaxies just as unimpressed as me – offered its spontaneously assistance. In the context of many interesting evening meetings with Italian ambience the galaxy mountain was evaluated – partly until late into the night …

The many meetings led to an excerpt of interesting/worthwhile galaxies, which were combined into our base document, the “TBG-Objektliste”. The objects were defined in prioritization categories. With our new internet presence the “TBG Objektliste” itself is since a short time protected downloadable for each TBG-project group member.

Note: The met galaxy selection is only a proposal, these are NOT confirmed candidates of tidal streams. So the possibility is always given that many hours were invested into a galaxy from our “TBG-Objektliste”, which were eventually useless. Anyhow our team is extremely encouraged to make very long exposed pictures and sometimes it leads to interesting news.

My own possibilities for very long exposures did not change meanwhile, so after finishing the “TBG-Objektliste” I thought my job was simply done.

But in return Peter Riepe asked me to continuing my work within this group, supporting him by leading the group and doing organizational work. I did not think twice about that offer.

Meanwhile I keep our base document in a current version. This document has grown up to a size of approximately 70 pages so far. Up to now my last project within the TBG-group is to create this TBG-homepage as webmaster.

My request was to show, that there are many possibilities to get in contact with interesting topics like long exposed galaxies.

Back to the project